Racing out on the harbor a few weeks ago one of our guys suddenly found himself in the drink. I was able to capture a few clips on video in between helping to make sure that he was safe.

This is a real safety tip that you should probably take a lesson or two from. You’re not going to ever prevent a Man Over Board – it’s going to happen one day but from this you might beable to lessen the number. Personally I’m up to 4 now (it’s not me going over it’s all the other crazies).

Here’s what happened, he was setting up the spinnaker bag for a hoist when suddenly the bow pulpit gaveway and that was it – he was in. The culprit? A through-deck bolt completely snapped and upon inspection it had been fatiguing away over time until the point where it could hold no more. 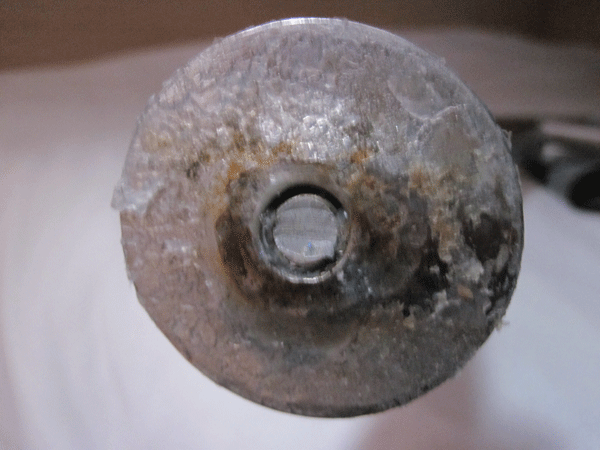 Broken bolt causes man over board. Almost impossible to prevent.

Fortunately for Pete, our skipper went into MOB recovery mode instantly. We were on a close haul at the time, we threw a life ring, tacked over, turned downwind went past him then gybed around to come up along side. We tossed a rope and hauled him in. What was interesting however was that the crew were so shocked that no one loud hailed “Man Over Board” including myself. As responsible crew we need to be aware and train on what to do just as much as the skipper. We used the classic MOB maneuver shown in this animated 40 second video:

We found enough dry clothes onboard to carry on the race and came in third in A class fleet.

Here’s the video clip I was able to capture of the event:

A few lessons then about Man Over Board:

Hilarious video of a guy learning to sail.
Sailing Video: Informative and Slightly Funny
Sailing Education is Supposed to be Fun
Sailing Video of Rolex Regatta 2011
Heaving To in a Sailboat is a Practiced Skill
Learning to Sail with the Tell Tales
You are here: Home1 / Sailing Education2 / Storm Tactics3 / Man Overboard captured on video
How to gybe with a dipping poleiPad, iPhone, and Android eLearning Tool for Sailing Education
Scroll to top