Last evening we were sailing our Beneteau 373 under a pleasant Texas sky with 10 knots of wind. A very experienced sailor was on board with us albeit he had not sailed for about 15 years. His past experience was impressive with 10’s of thousands of miles in his logbook – mostly racing. One cringing story was he himself going overboard with a spinnaker up at night and he was the only one on deck. Fortunately he was tethered using a jack line and is alive today to tell that story. At that speed he was not able to get back on board and had to wail on the hull with his fist to wake up his other crew member. Wow!

Fact of the matter is Man overboard happens and it IS life threatening. Please don’t discount an MOB happening on (off) your boat. Personally – I’ve had three.

(1) This happened to us in the Mediterranean about 10 miles out to sea off Corsica. The helmsman set the autopilot and stepped to the back of the boat to take a pee. The ladder was not secured and off he went. He was so scared that he could not yelp out any distress sounds.

(2) On a catamaran near St Lucia in the Caribbean reaching at about 8 knots, a crew member was not paying attention to how close to the  edge at the back of the boat. He fell over – and called his own “Man Over Board” then grabbed the dingy as it went past and pulled him self in to the dingy.

(3) A crew member steps to the back of the boat to wash her foot. She steadies herself with the ladder which was not tied on. Over she went.

All pretty simple ways of people going overboard and no amount of good skippering and leadership can prevent one.

So – last night a koozie goes overboard and the experienced skipper decides to do a figure 8 retrieval and scoffs at the suggestion of an engine on retrieval.

After 3 attempts by the – again – very experienced sailor, the failed MOB routines resulted in a damaged ego and eventual retrieval with a swim in the lake.

The point I’m making is that you should retrieve your MOB by the best means available to you. And by far, an engine will get you accurately back to your MOB in the best time, and keeping you in the closest proximity to your MOB. I’m sure this shakes up some of the staunch proponents of the figure 8 MOB methods or the quick stop MOB methods of retrieval. But this suggestion doesn’t go against any of that. As a good skipper you should be versed in all means of saving your crew member’s life. However, I’m suggesting here that your first and best means is to use your engine. Secondary methods, because of the possibility of a failed engine, should absolutely be practiced. Knowing the theory is not enough.

The following is a graphic in the NauticEd Skipper Course showing the engine on MOB retrieval method. How to fuel up your sailboat
Sailboat Mast Height
Top Ten Safe Boating Tips
Short sailing tip with big sailing lesson and slight humor
Heaving To in a Sailboat is a Practiced Skill
FREE Rules of Right of Way Course for Sailboats
You are here: Home1 / Sailing Education2 / Storm Tactics3 / Man Over Board discussion
Shhhh be vewy vewy quiet – don’t tell the power boaters 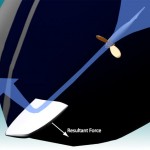 Preventing an autotack in a sailboat
Scroll to top