June 2012: This last week, the NauticEd crew headed out on our annual Bareboat Charter Master Graduation Sailing Trip. This year we chartered catamarans from Dream Yacht Charters in Raiatea,  about 200 km North West from the main island of Tahiti in French Polynesia. To get there you need to fly to Papetee on the island of Tahiti then take a puddle jumper for about 45 minutes to Raiatea. The Dream Yacht Charter Base is about 5 minutes from the Raiatea Airport but we stayed our first day and overnight at the Hawaiki Nui Hotel another 5 minutes away. I highly recommended the Hawaiki Nui on trip advisor – the huts were awesome and the food was great as with the staff. We did a night scuba dive on a wreck just off the dock at the Hawaiki Nui in about 60ft of water. It was a pretty cool dive and incredibly convenient – the dive shop is right at the hotel. By the time we finished the dive, the hotel was in full swing of a very lively and traditional Tahiti Dance show. 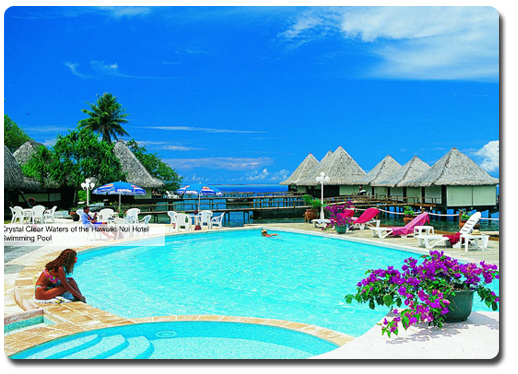 Jerome from Dream Yacht Charters showed up earlier that day and gave us an excellent chart briefing of the sailing area in preparation for us to pick up our catamarans the next day. Jerome was incredibly friendly and gave us a PDF of the chart briefing which we were able to put onto our iPads.

Saturday morning we split up into 2 groups – 1 to get squared away with the boats and 2 to attain provisions. Then by about noonish we were ready and we all set off.

Sailing in the area was very different than typical Caribbean sailing. First off, the place is sooooo beautiful that I ended up taking over 1000 photos with my Nikon D3100. Each island is surrounded by an outer ring reef and so the sailing that you do is either inside the lagoon or in serious open water between islands. 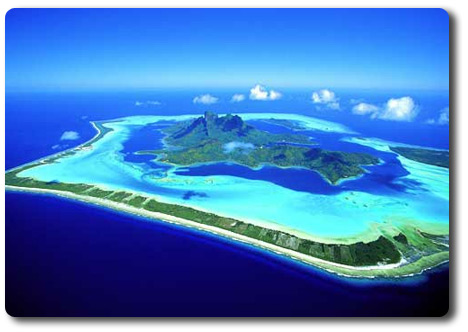 In the photo above you can safely sail in the blue water shown inside the lagoon. Although as you will discover safely is a relative term. 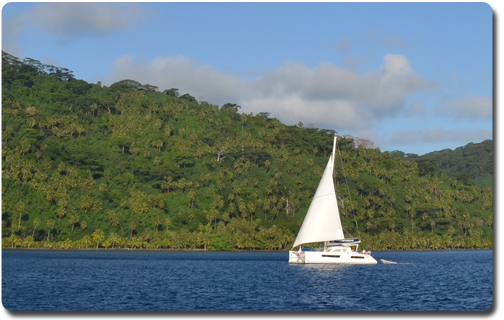 Sailing in the Lagoons

Above, one of the Dream Yachts Catana Catamarans in our NauticEd flotilla fleet.

Below, waves crashing on the outer reef. You’ve got to enter the lagoon only through the marked passages. 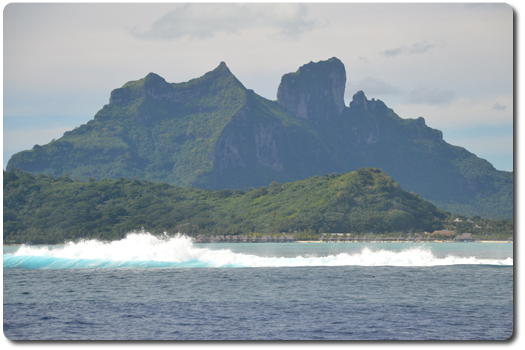 Waves on the reef at Bora Bora

Sailing inside the lagoons present a challenge – it’s not necessarily a hard challenge but certainly an awareness challenge as shown by the following photo  which we snapped late one afternoon. The powerboat is pulling on a halyard to heel the sailboat over whilst the sailboat is trying to kedge out off the reef with the anchor and windlass. NOT GOOD. 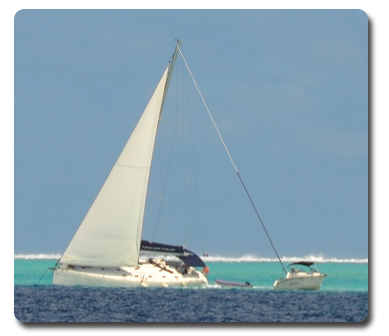 In this photo below you can see extreme shallow water right next to the darker deep blue water.The photo a very typical scene – a well marked reef/shallow area next to an indescribably beautiful turquoise color with a deep rich dark  blue in the foreground. The turquoise represents shallow water while the dark blue runs deep. You can notice a distinctive transition line between the colors. This is because the depth changes almost instantaneously. IE you get no warning from your depth meter. The front of the boat can be in 6 feet of water whilst the aft can be in 50 ft. 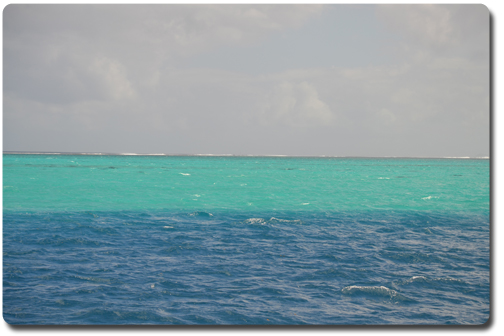 This photo below was a depth transition from 20 ft of water to 3 ft. 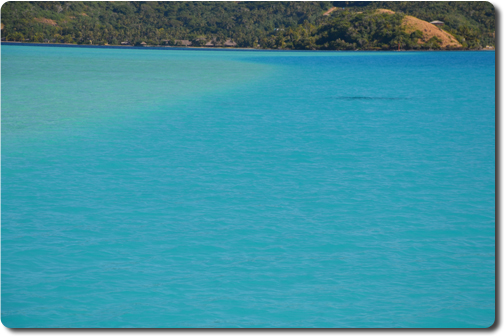 Navigation markers however are reasonably abundant and so the navigation sailing lesson begins here. 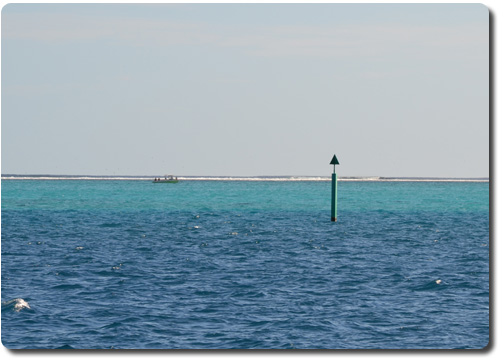 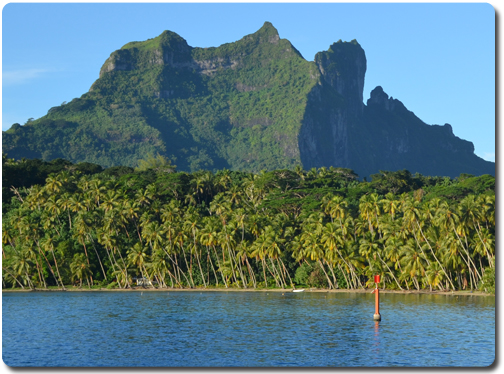 Keep red to the island side 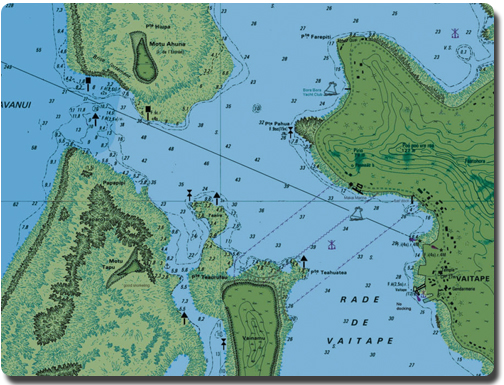 When entering a channel there is usually a set of transit markers with a compass heading marked on the chart. This entrance into the Bora Bora lagoon is marked as 112 deg. So you just line up the transit markers on shore and follow the compas heading in. To exit you just take the reciprocal heading. 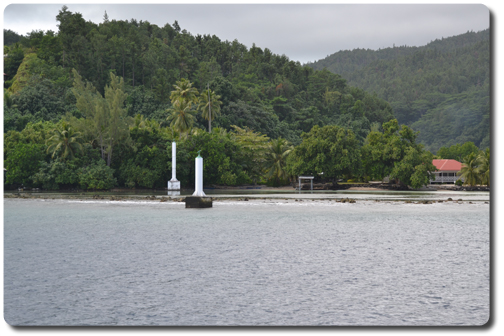 In French Polynesia they also use the handy Cardinal marker system. 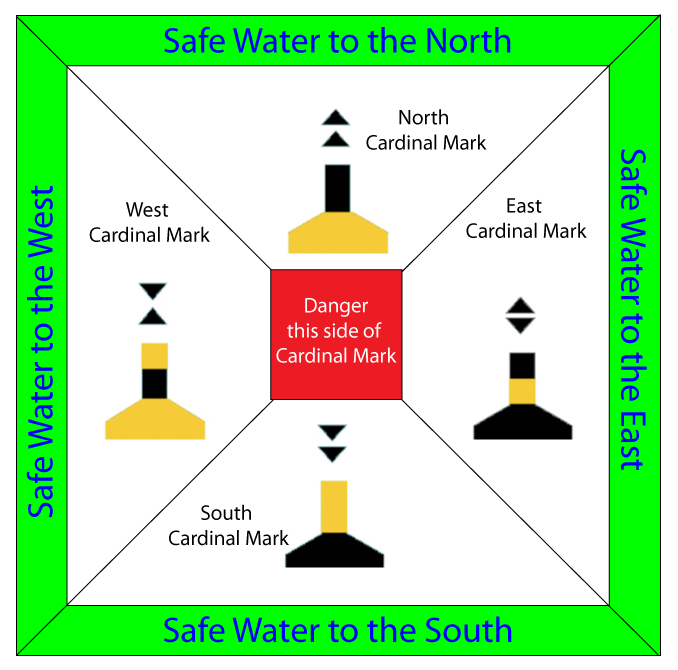 How to read Cardinal Marks

These also aided our navigation. This one below told us to stay west of this mark. You can see the shallow water on the other side of the mark. 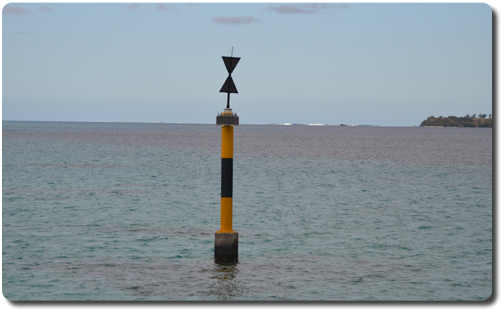 But from a distance this one looked like an isolated danger mark because we could not see the 2 upward triangles especially with the huts in the background. This mistake got us into some shallow water and we had to turn back. Additionally this was not placed on the chart. 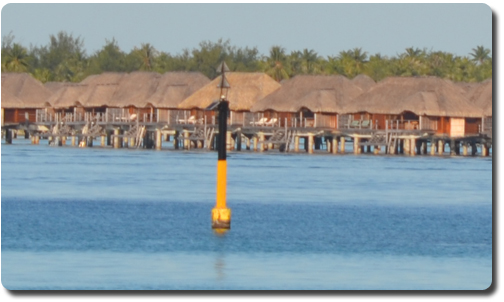 A cardinal mark but difficult to see its marking

As we sailed around in the lagoons we soon learned that a more than keen lookout was required to spot the marks and look for water color change. What was interesting was the Jerome from Dream Yachts completely discouraged us from using the GPS. He said he’d rather us rely on keeping our heads away from a screen and looking at the water and navigation marks. We took note and sailing the whole week with out a GPS. Even when returning from Bora Bora to Raiatea we used line of sight 3 position fixes via compass to plot our position on the chart. It was good practice and we nailed the entrance. Cook would have been proud. 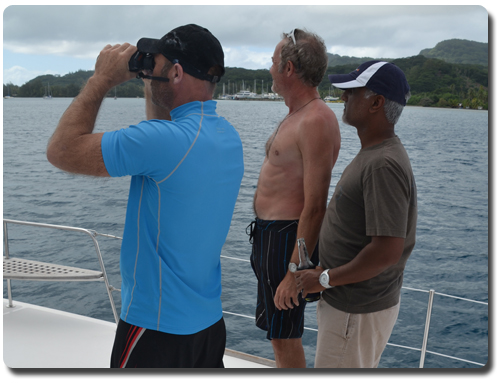 Another indication of shallow water is a bit more rudimentary but work none the less is that the locals have gone out and stuck sticks into the reef. 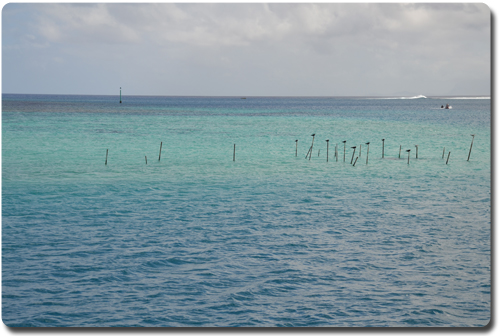 The shallow water is pretty obvious above in good light conditions but less obvious as the light changes and so the sticks below were a good help. 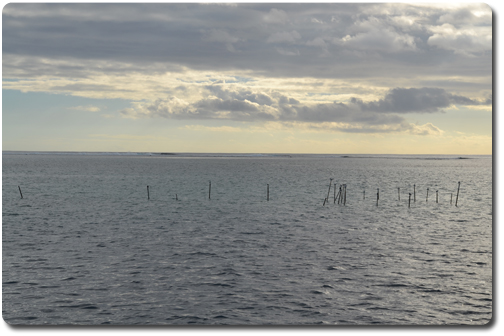 Dream Yachts provided us with some very good and accurate charts.  So fortunately the whole navigation exercise was not that difficult but certainly we’ve tried to instill  above:

We highly encourage you to get on down to Tahiti for an incredible sailing adventure overall we had a real blast and so did the kids that we took along. 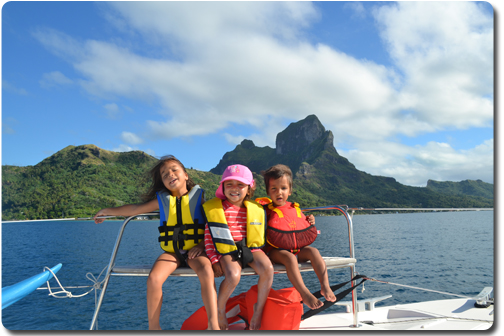 Vivian, Alexandra and Evan Sailing in the Bora Bora Lagoon

A few highlights of the trip was a visit to the Anapaperles Pearl farm. 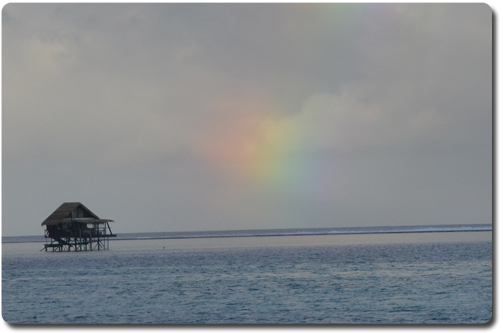 Inside looked something quite different. 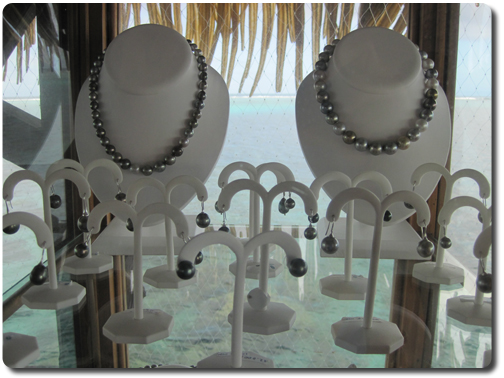 Inside the Pearl Hut

And right underneath we went for a 30 minute snorkel through the oyster nets where the oysters grow and produce the pearls. 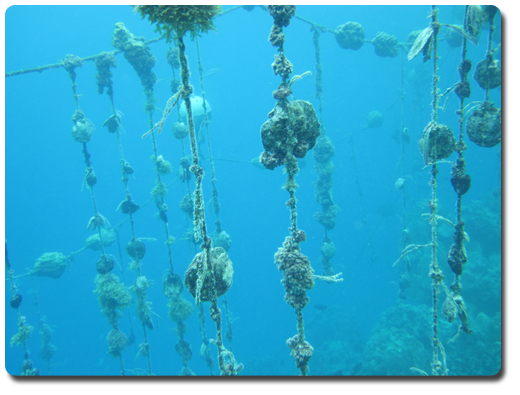 Another highlight was one of the best snorkelling experiences I’ve ever done (and I’ve done a lot). We snorkelled between two Motos (Islands) where the current runs at about 1 knot in a depth of about 5 feet. The area is called the coral river and it is loaded with fish and coral heads. Here’s a short video with a fun end.

Thanks to the Mai Kai Marina and Yacht Club in Bora Bora. They were incredibly hospitable. Filled us up with water and some very nice Mai Tai drinks and excellent food. We well worth while stop. They are on Bora Bora Island on the left just after you enter the main entrance into the Bora Bora Lagoon. 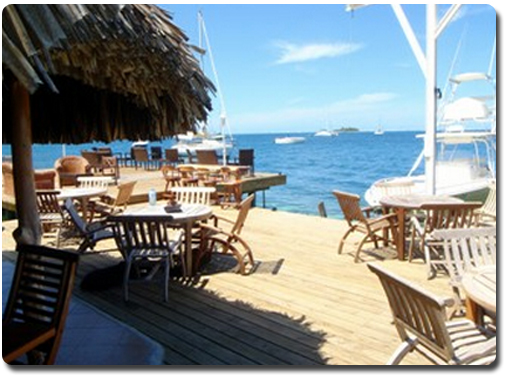 The final coup de grace of the trip was to visit the place on Tahiti Island where Captain James Cook witnessed the transit of Venus across the sun in 1769. He’d been sent to the south pacific to witness the event and take time measurements so that the Royal Astrological Society could use the data to calculate the size of the solar system. Ironically this event reoccured the week prior to our visit to Tahiti. 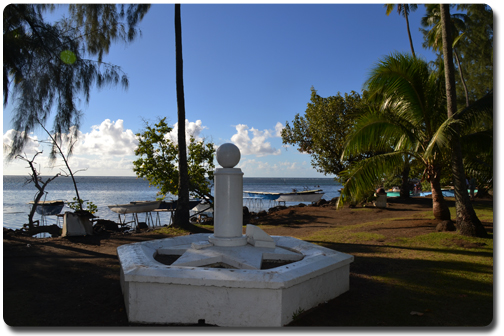 Monument to Cooks Effort in Observing the Venus Transit in 1769

Take the NauticEd Coastal Navigation Course – it is definitely what is needed to instill the confidence to do a trip like this.

Contact us if you’re interested in sailing vacations in Tahiti or beyond – we can arrange the trip for you,  give you some good advice on getting there and places not to miss.

Set and Drift or Direction and Rate Problem
Sailing in the British Virgin Islands for 10 days – day 2
What to Take and What to Provision on a Bareboat Charter Vacation
10 Best Boat Drinks
How to solve a tide height using the rule of twelves
There are two types of Sailors
You are here: Home1 / Sailing Vacations2 / Pacific3 / Sailing in Tahiti: Navigation Tips
Transit of Venus: Celestial Navigation Check Your Anchor Rode
Scroll to top