This won’t happen again in our lifetimes apparently. Venus, as I write is transiting the sun and a few moments ago I got to see it. It’s a very small dot on the sun but viewable none the less unmagnified. But you HAVE TO wear eclipse glasses or welding glasses to protect your eye and in any case the glare is too high if you try with out.  Just so happens that next week we are sailing on our Bareboat Charter Master post graduation sailing trip to Tahiti. This place has historical significance with Venus transits. Captain James Cook was commissioned by the Royal Astrological Society to sail to the south pacific (Tahiti) to observe the transit in 1769. The mission was to note the time that the planet entered and exited the sun’s circle. This was also performed by others in other various places on Earth and the attempt was made to use some pretty amazing for it’s time geometry to help calculate the distance to Venus and to the Sun. A few months later, Mercury also transited the sun. Cook happened to be in New Zealand at that time and also made that observation. I plan on visiting the bay where Cook made the Tahitian observation next week. 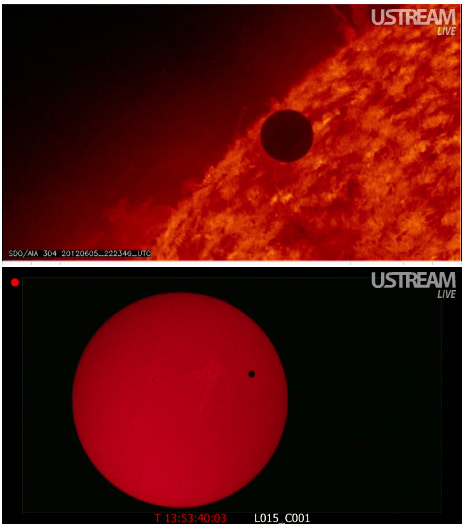 [In 1769] Why was Halley so eager that hordes of astronomers disperse to the ends of the Earth decades after his death to watch a planet pass between the Earth and the sun?

The 17th century German mathematician Johannes Kepler had already calculated the proportional distances of the solar system. Thanks to Kepler, scientists knew that Jupiter is five times as far away from the sun as Earth is, for example.

They knew the proportional distances. They just didn’t know the absolute distances. This was the central quest of astronomy: to determine the size of the solar system.

And suddenly Halley saw how it could be done, using the transit of Venus.