I’d heard legendary stories of this before but was never too sure of the reality of it. However, this weekend I actually experienced it.  In our saturday regatta race the wind forecast was for 3 knots rising to 8 knots in the afternoon. Not so good for the sweet spot performance of our Beneteau First 45 who likes higher winds. We started the race first across the line in “A” fleet at 1pm. Winds were still howling (not) around 3 but down the harbor we could see the wind line coming. Smiles on faces.

The tide was in full ebb running out of the east facing harbor at about 3 knots. While much of the fleet elected for the center of the harbor where the current was higher, our tactician had observed the wind had filled in more on the south side of the harbor.  So we took advantage of the higher wind with slightly less tide flow nearer the edge. This tactic helped us keep up with the faster fleet boats like the TP52’s. 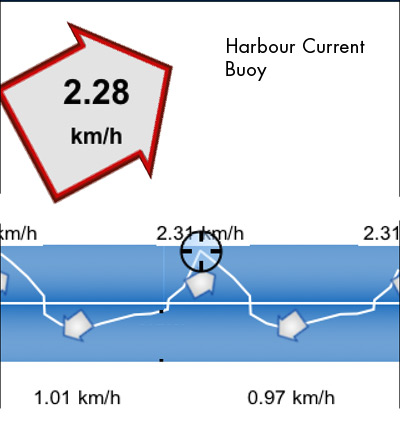 Current Profile in the Waitemata Harbour

Exiting the harbor, the first mark is far to the north and many boats headed directly for the mark on a starboard close reach. Watching the winds die back down, our tactician knew better. We continued to head further out of the harbor entrance before tacking over. Why? 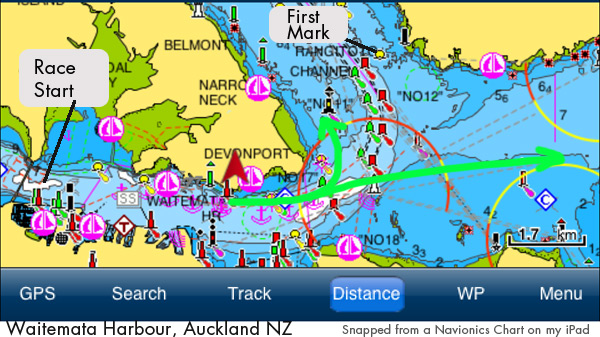 Most regatta races are won by local knowledge. Here, the tide flow exits the harbor and splits in two around Rangitoto Island. Half heads north and half heads east. Our first mark was north east and with the tide still ripping out and dying wind we didn’t want to get caught in a situation were we couldn’t overcome the tide.

As the wind died, the tide took over. We were making about .25 knots headway and 1.5 knots sideways. Furthermore, the race committee recognized that with the dying wind they should end the race at the first mark. That meant that the fleet had to pass between the first mark and the committee boat set 100 yards west of the first mark. Those that had not gained enough ground east were simply “floating” past west of the finish line with no ability to do anything except DROP ANCHOR.

Our tactics had paid off – we floated sideways through the race finish line to take a first place.

It was a very amusing sight – dozens of sailboats ANCHORED to the west of the committee boat – RACING. LOL. 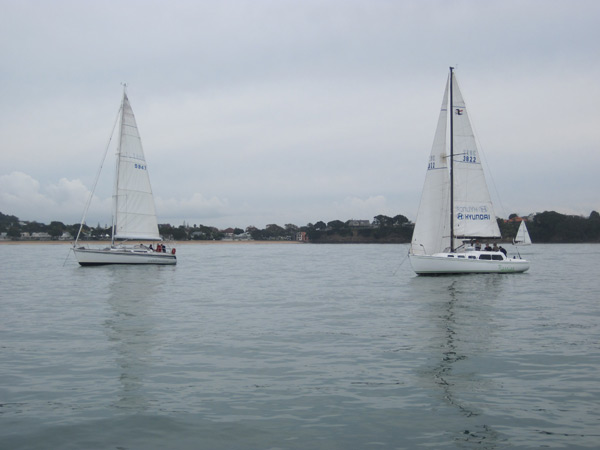 Anchored during a regatta race

So what’s the take away lesson here?

Almost certainly if we’d been cruising, we would have turned on the engines and motored to the destination. During a race like this we won by understanding the tide, tidal current and matched that with the peak times. Understanding tides ARE important, they can overpower your ability to sail out of trouble should you be in a light wind condition or heavy current condition. Trying to sail back into San Francisco bay one time was impossible against the tide even with 12 knots of wind. Had we known a little more back then and pre planned the trip we would not have ventured outside the gate.

The NauticEd Sailing Courses cover all aspects of sailing. In particular, the NauticEd Coastal Navigation Course covers Tides and Current, and how to predict them.

Become a pro and get educated with NauticEd.

Come Join us for the Rolex Regatta on a Maxi Race Yacht
Anchoring a Sailboat Tip
How to solve a tide height using the rule of twelves
How to calculate rate and direction aka drift and set
Tide Calculation Pop Quiz
Leaving a Mooring Ball in a Tidal Current
You are here: Home1 / Sailors Sharing2 / Advice & Tips3 / Anchoring in a Regatta Race
How to Pull on a LineTransit of Venus: Celestial Navigation
Scroll to top