While it is generally accepted that mooring is safer than anchoring, there are still some considerations. The following photo from Waiake beach in Auckland, New Zealand is proof of this. Whilst visiting New Zealand for the purpose of spreading the NauticEd word, we came across this early in the morning after an overnight mild storm.

After talking with the locals, the mooring chains on all the moorings in the bay had recently been replaced about 6 months ago, and so that was not likely the culprit. Upon closer inspection of the boat, the cleat and bollard had broken off the boat due to age and lack of maintenance on the tie off points on the foredeck. The storm was caused by high winds produced from a low combined with a high as in the following map. In the southern hemisphere, lows spin in a clockwise direction and highs spin anticlockwise. The two systems then combined here produced 35 knot to 40 knot north easterly winds. This direction is completely open to Waiake beach (on the north east coast of New Zealand) and thus the moored boats in the bay are vulnerable to these high winds.

What should be done?

Feel free to add to this blog regarding mooring safety. 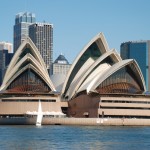