This is a great little article written by Joseph Dieber, one of our NauticEd students. Joseph recently chartered a sailboat in Sweden.

A pair of buddies and I set out for a late-season adventure sailing the Stockholm Archipelago. By “late season,” I mean the last week of September. In fact, we were the last group to charter that particular boat, which was removed from the ocean for the winter just after we turned it in.

The advantage of being at the edge of the season is that we seemed to have the sea to ourselves, other than a few large cruise ships and some ferries.

The Stockholm Archipelago consists of 24,000 islands extending out from the city of Stockholm into the Baltic Sea. The landscape is reminiscent of the coast of Maine or Lake Superior with rocky bays and pine trees. The Stockholm Archipelago consists of 24,000 islands extending out from the city of Stockholm into the Baltic Sea. The landscape is reminiscent of the coast of Maine or Lake Superior with rocky bays and pine trees. The boat we chartered through NauticEd was a beautiful well-maintained 2016 Dufour 412. The boat handled well and was extremely comfortable with a more luxurious interior than what I had become accustomed to on previous charters. While it was chilly with weather dipping as low as 30F at night, the days were pleasant at approximately 50F, necessitating only a light jacket. We encountered some heavy rain on the first day, but other than that, it was a mix of overcast skies with intermittent sunshine. The wind was perfect at around 7-10 knots, and seemed to be fairly consistent as most the islands are fairly low. The large amount of island and submerged rocks makes GPS a must and can limit the amount of tacking that is possible. We often found ourselves motoring when the passages were tight. There are a large number of inlets and bays to choose from allowing for different types of birth, including anchorages, mooring balls and Mediterranean mooring to docks.

We spent a night anchored in Finnhamn anchored in a protected bay next to a national park. We had a chance to hike through the pines on the island, and the beautiful forest reminded me of the rainforests of the Pacific Northwest. The bay has a restaurant and a hotel that were closed for the offseason. Satellite images of the areas show that this bay is packed in the summers. One of my favorite spots was docking in Sandhamn. This vacation island has a few resorts and is a popular travel spot for people escaping Stockholm. Being the offseason, we had most of the place to ourselves. Some of the restaurants remained open and we had a delicious meal at the Sandhamn Seglarhotell. The scenery is beautiful and there is an old fort on an opposite island, which adds beauty to the backdrop of the bay. Before returning to Stockholm proper, we had a chance to stay in Saltsjobaden on a mooring ball for the night. This well-protected bay features a 17th century hotel as a backdrop, along with a few restaurants and offers the possibility of hopping a train to downtown Sweden. I highly recommend this sailing experience as a change of pace from the usual sailing in the BVI. The choices of where to stay and what to explore are endless, and the addition of the long history and rich culture of the region make it fascinating.

Joseph – thanks so much for this write up of your adventure. Looking forward to hearing about your Gulet trip next year in Croatia.

If you have been on a great sailing adventure, write it up and send to us. We’ll post it on our NauticEd Sailing Blog to help others learn about cool sailing destinations around our beautiful planet. 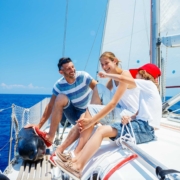